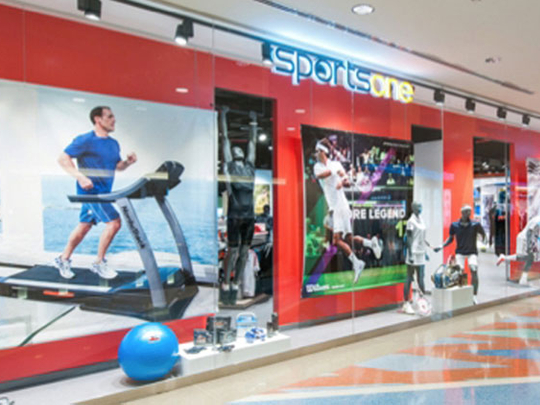 Dubai: For a group that owns the Fitness First network of gyms in the region, launching into the sale of sports clothing and equipment would seem like the most logical thing to do. This is what the Landmark group seemed to have done with the launch of the SportsOne store network.

â€œThe plan is to create a chain of stand-alone stores; where a location allows a link with Fitness First, we will go for that. But it is not a priority.

In terms of the retail rollout, SportsOne has gone for a phased rollout rather than an instant splash with multiple store openings in a short period of time. The first two sites opened in Saudi Arabia, followed by one in Dubai, at Al Ghurair City. With six stores open, it is expected to increase to 40 in the GCC by 2016. The largest stores would have an area of â€‹â€‹1,394 square meters.

While its intention is to develop a base of untested brands, the retailer also offers brands such as Nike, adidas and Puma.

â€œWe source from an authorized distributor of a brand and, in the case of Adidas, we buy directly from them,â€ Goyal said. Currently, established brands represent 50 percent of SportsOne’s sales. The distributor’s goal is to achieve stock rotation three times a year.

According to Euromonitor International estimates, the local sportswear industry showed solid growth in 2012-2013, with a growth of 3.6% and a figure of 3.5 billion dirhams.

â€œGrowth during the reporting period was driven by the growing trend in health and wellness and government campaigns to tackle obesity and promote healthier lifestyles,â€ said Maii Abdel Rahman, research analyst.

“A growing number of health clubs coupled with government initiatives to encourage sports activities, such as the Dubai Sports World (a partnership between the World Trade Center and the Dubai Sports Council) and the ‘Your Weight in Gold’ initiative “of the Dubai Municipality have had a positive impact on the sales of sportswear.

Still, Euromonitor estimates the category remains relatively small compared to the clothing industry as a whole, accounting for around 17% in value. The clothing market grew at a faster pace than that of sportswear, 4.2% compared to 3.6% in 2012-13. It could be that the sportswear market will only gain depth if it manages to attract a larger user base. â€œSales are primarily driven by young adults in the UAE, with a strong focus on women’s sportswear due to their higher growth potential,â€ Maii said.

â€œSport as a fashion trend has evolved over the past few years; more recently, pairing high-end fashion designers with feminine sportswear has become the latest trend. The recent partnership between Stella McCartney and adidas reflects the growing importance of fashion in women’s sportswear.